Create a project site based on a custom field value

One of the nice new features recently released on Project Online that will also be available for on-prem sometime in the future (PS 2016 or maybe if we’re lucky 2013 sp2?) is the ability to create custom fields via workflow using the new API CreateProjectSite. While on its own this may be a rather small change what it opens up is the possibility to completely control the Project Site creation which previously had only the out-of-the-box options i.e.; on or off!

So using this new feature I have created a walk-through here to resolve an often asked customer requirement:

Note: This solution can be used today on Project Online, but as of yet will not work on Project Server 2013 on-premises.

In order to fulfill this requirement we will need to create a simple two stage workflow and associated Enterprise Project Type to be the default project type.

Used to collect project details including “Project Number” which will be a required field. Other PDP’s such as the project schedule will not be available.

In this stage no project site is available.

First thing upon entering this stage the project site is created using the details from the previous stage (site URL = “Project Number”), then other PDP’s, etc are shown to allow for the project to continue.

I will go through the configuration of PWA for the workflow in brief, if you are not familiar with creating workflows or need further information then I’d recommend the following MSDN How to: How to: Create a Project Server workflow for Demand Management.

Firstly you will need a custom field called “Project Number” that is configured as a Project entity, type Text and Workflow-controlled enabled, as so:

Next create / edit the “New Project” PDP, and add the Project Number field to the PDP.

Optionally leave the field out of the PDP and go and install the Nearbaseline ID App which will set the project number in the background once the project is created (ahem shameless plug).

Now create the required Stages and Phases as follows:

Note that in the Project Registration stage the “Project Number” field must be marked required.

Now create an Enterprise Project Type using the New Project Page created above and for now leaving everything else default / blank as you’ll have to come back and associate the EPT with your workflow after the next steps.

With that all setup we’re ready to create our workflow in SharePoint Designer.

The workflow creation is based on the steps documented in the MSDN guide: Project Online: Bulk update custom fields and create project sites from a workflow, as such I will skip some of the details and suggest you review that article if you have any problems.

The only change from the steps outlined in the MSDN article is in the forth step where the URL is constructed for the CreateSite call, in our case we want that to reference our “Project Number” custom field in the parameter in CreateProjectSite(parameter), so your URL should look like: 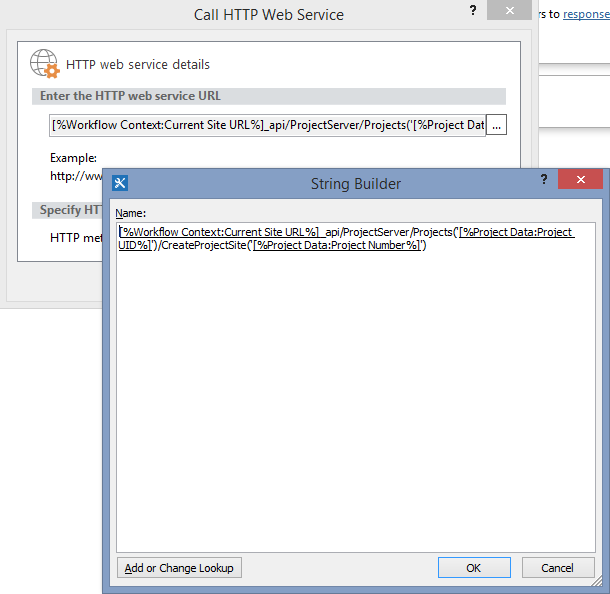 Note: Don’t try to cut and paste those URLs if you do so you will lose the special [%tags%], use the Add or Change Lookup button to insert the tags.

Once your workflow is done, save, publish and return to PWA and associate it with your EPT that you created then test!

Find attached below the SharePoint Designer Workflow solution created above exported as a Visio diagram, note that I cannot provide any guarantees or support for this downloaded Visio file.

Screen shot of the workflow in Visio:

Hope this is useful to someone out there!

A week of Ignite in Chicago is coming to an end and I thought it is about time to share some of my thoughts and discoveries over the last week, firstly though it’s been great to see a lot of familiar faces amongst the 23,000 or so people here in Chicago!

I’m not going to do a full write up of every session I’ve seen, the great thing about the blog-o-sphere is I can point you to the great write-up’s done by others (@PWMather‘s posts here, here and here are a great place to start!). What I will do is focus on some of the details that have interested me most.

First up of course is what can we expect from Project 2016 / Project Server 2016 and Project Online in the next release; hmm how do I say this diplomatically? –  Not that much.

I really really wish this feature was available six months ago considering the work I have been doing for customers lately! Good riddance VSTO I say! :)

This is a long awaited feature for Project Server, however for some reason it didn’t get much air-time here at Ignite, fortunately I’ve had a chance to see most of during my day job working with some TAP customers and it goes a long way to addressing the typical need for managing / controlling and monitoring resource usage and over-allocation in a typical organisations.

I have to say though, with a major disclaimer (as I am an employee of TPG – The Project Group), that this new feature doesn’t quite come close to what is available in TPG’s TeamManager App, but then again I think that’s great as it really shows the the benefits of the App Model that Microsoft has created!

This is already happening in ProjectOnline, but the interesting thing is what does this mean for reporting directly from the RDB as it is not supported to report from the SP Content DB’s? Well the good news is that according to at least one MS product manager for Project it will still be supported, so allow me to quote @mikemcleanlive; “You will be able to report directly against the new consolidated db if it’s on a dedicated server” (I’m just going to ignore that little “if” in there for now)

I was really hoping to see more cool new features both for Project and SharePoint, much of the latter focused on Delve and Office Graph API which I have yet to see any relevance in the Project space. Additionally the push to be mobile first, cloud first for most of Microsoft seems to have been neglected in parts of SharePoint and especially Project Server, I expect it will be a very long time before we see PWA usable on a mobile phone for instance! :(

Having said that, the good thing about Microsoft’s online story with Office365 and Project Online is that all that hard work MS have put into making the software fast, responsive, stable and fully integrated across the full stack of MS products are all now going to be available on-premises as well, so this might mean Project Server 2016 is not going to be a major release (2003 -> 2007 or 2007 – 2010 for example) but it will be a solid upgrade for existing and new customers.