Despite the best efforts of Microsoft with the UI design of SharePoint / PWA, I frequently get requests from customers to make changes / additions to the standard UI elements such as the ribbon menu, which – if you’re reading Microsoft – people very often still just “don’t get”.

So a small thing I came across while digging around in the internals of the Project Server undocumented JavaScript was an easy way to re-use the standard functions of the ribbons in your own html / JavaScript.

(Note this is not a post about ribbon customisation, see Alex’s great post series here if that’s what you’re after.)

Example: ever wanted buttons at the bottom of a long form? 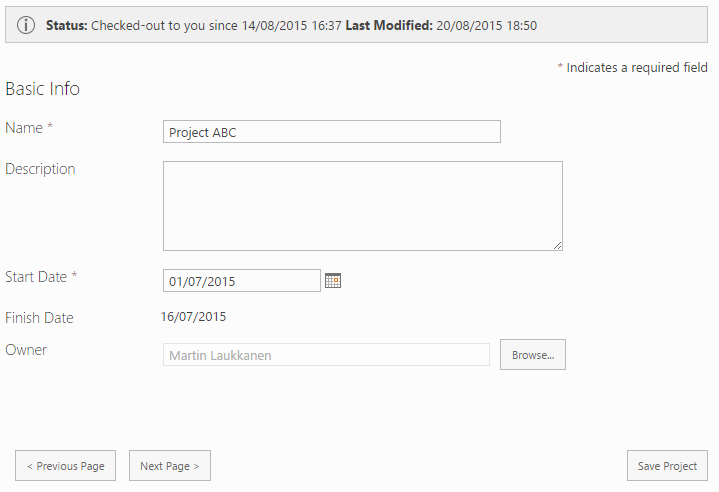 Note the JavaScript function calls which are quite self explanatory: PDPInfrastructure.GotoNextPDP(); etc. As you might guess you can find a similar method for most options (although some are not so simple).

To use: simply save this as a html file somewhere in your site collection and then reference it in a Content Editor Web Part, see here for an example of how to do that.

It may go without saying but I will anyway: This is using undocumented and unsupported internal functions that will undoubtedly change at some point in the future whenever Microsoft feels like it.

You have been warned. But in the meantime keep giving customers what they ask for. :)

I came across this one working with a customer recently, basically the following error comes up whenever you attempt to edit a project schedule in PWA and selecting a view that contains custom gantt chart formatting:

Error Message: View Failure: The view failed to load. Press OK to reload this view with the default settings….

In some cases users see the additional message of:

An error occurred while opening your project. Give us a few minutes and try again. …

While this error is quite generic as it can be caused by a number of things, this specifically only occurs when attempting to edit a project using the view in question, all other views work (view and edit) and these custom views definitely work when only viewing the project data.

For example modifying a view to use the following Gantt Chart with “Custom Duration 1” selected will result in this error:

Finally I have tested this issue on a number of Project Server versions and as far as I can see it exists on all Project Server 2013 SP1 and above – up to the latest Cumulative, as well as Project Online (at the time of writing).

However it does not affect Project Server 2010.

Sorry can’t help you here, other than to disable the customisations to the gantt chart! I’ll be logging this one with Microsoft and will update this post if anything comes of that.

I came across this while working with a customer and quickly found that the error triggers a known issue in my Bulk Edit app as well which was causing some unexpected errors using the app for some people, however this is a broader issue as it causes basic OData feeds to fail completely with the following message: Error message accessing /_api/ProjectData/Projects

The problem can happen both on-prem or online but if you have access to the ULS logs you will see the following log entries (showing only the interesting bits):

As error logs go that is a pretty helpful one!

The issue is caused by the Enterprise Custom Field configuration of the Project Server, specifically to looks like there are some duplicate named fields (Campaignstatus in my error above), now of course that is of course not possible! However when you look at the OData feed you can see that a few things happen:

However there is a bug, OData is case-sensitive while SQL is not. So in my example above it seems that there are two fields the same name but with different cases, specifically I have the following two fields configured: Campaign Status and Campaignstatus. In my case if the second field was named CampaignStatus then this issue would not occur as it would have a number appended in the feed! (While this might sound a little esoteric actually I’ve already seen this a couple of times in German PWA instances where words are typically conjugated, etc)

Note; renaming a field to a different case does not work(!), you need to recreate the field in order to regenerate the correct ‘cased’ Odata name.

Hopefully this bug will be fixed in a future service pack, but for now in Bulk Edit at least I have implemented a workaround anyway.

The nice thing about Microsoft’s new continuous improvement / upgrade work on Project Online is the occasional new feature that pops up unannounced, like this:

The ellipsis next to each project name in Project Center opens a dialog as you can see showing some handy project summary information including a progress bar. Neat.

Not sure when this appeared, no doubt sometime in the last few months, but my guess is that those of us not using Project Online will have to wait until Service Pack 1 to see it!

If you’ve worked with large lookup tables in Project Server before you know how unwieldy they can get very quickly, in 2013 the page control you use now includes a nice search feature to help but the default four lines displayed really doesn’t show much! See this example where you can see the scroll bar on the right is already very cramped:

To give some more flexibility with the size I have written the following JavaScript (jQuery actually) to increase the size of a list of specific lookup tables when opened on the PDP: 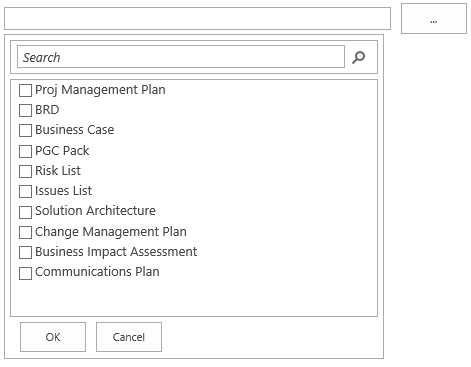 To use this script copy the script source above and save into notepad as something like “resizetables.js“, now on lines 6 and 7 you need to update the two variables used:

Once updated, upload the script somewhere in PWA (Site Assets maybe) then edit your PDPs and add a content editor webpart to the bottom of the page which links to your uploaded resizetables.js file.