I’ve been recently moving the last few components of my setup into the cloud and the last piece is decommissioning my development server, however not having full PowerShell access does place some limits on what can be done on Project Online so this particular error initially had me stumped:

Error occurred in deployment step ‘Install App for SharePoint’: Sideloading of apps is not enabled on this site.

On-premise that can be fixed as easily as:

However as Tobias Lekman points out to do this on Office 365 or Project Online you need to use another method. Unfortunately the script you need: http://lekman.codeplex.com/releases/view/98505 appears to have an old GUID, so a slight modification is needed.

Now your PWA site should look quite different: 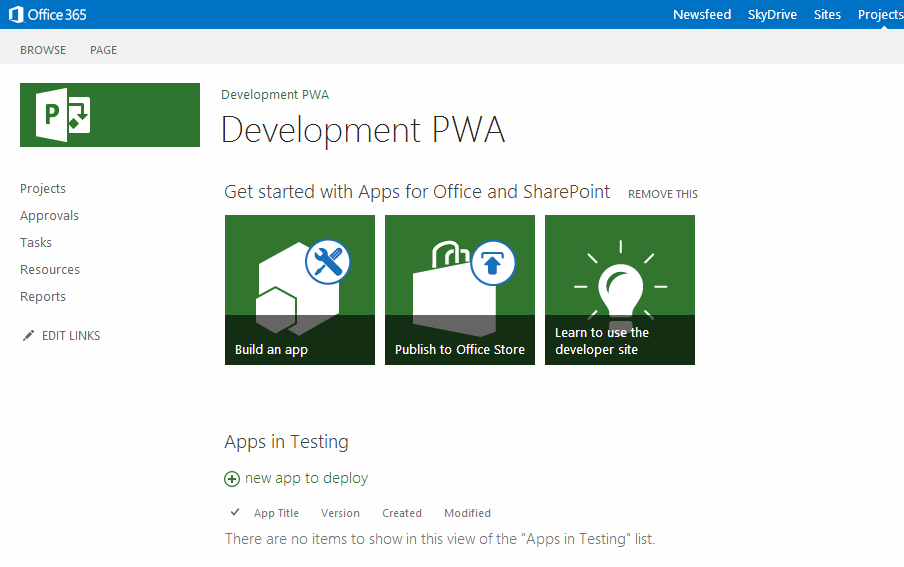 Now you can deploy from Visual Studio without errors and debug as you would on-premise.

Note: Obviously you don’t want to do this on a Production PWA instance, for Production sites only ever use an App Catalog to deploy manually.

Lastly, one thing that irritates me is that the O365 MSDN Dev subscription does not include Project Online! So please join me every opportunity you get to speak to your contacts in MS about fixing this serious omission!

PWA Provisioning in 2013 or ‘Look no site collection!’

A few people have written about PowerShell provisioning of PWA in 2013, see here and here, both reference this TechNet source. However if you’re anything like me you might find these confusing! Coming from 2010 it seems that everything has changed, so after struggling a bit using the above three references trying to update my old automated PWA deployment scripts I figured that it can’t hurt to have one more guide online covering the process.

Firstly though, one of the great things about 2013 is that PWA is now uncoupled from its Site Collection, basically /PWA no longer needs to be a Site Collection but can be any regular site.

Esoteric as that may sound it means that we no longer have this odd divide where Project data such as Project Sites live in various “SharePoint Intranet” site collections and PWA has to be in it’s own isolated space with different users, permissions, features, etc. Clearly this is geared towards supporting SharePoint permissions mode and generally making Project more SharePoint friendly, but combined with those nifty new license management features things become very much easier for many of us dealing with real world deployment scenarios.

This also has the added bonus of making it easier to provision PWA at the root site collection (in a more standard way – ick Site Collection host headers!).

Get to the setup

The challenge I had with the scripted setup links above was that they seemed to be missing something, for instance the TechNet article misses the whole site collection creation part and so then confuses things by splitting off into a separate article on creating PWA in an existing site collection? Is it just me or was that really confusing?

Anyway here’s my PowerShell script for provisioning a new PWA instance in a new Site Collection where the root site collection contains a Team Site and PWA is in the familiar location /PWA.

I lifted that from my mass deployment script (woo 2,600 lines and counting) so after my little rant above please excuse me if I forgot to declare one of the variables or something.

This article is republished with permission here: EPMonDemand Blog

Had some time today to upgrade my lab to SP1, and thought it worth a quick post here about my experience.

For many people SP1 will be the first update applied to Project Server and SharePoint 2010, so with up to a year or more of production use it’s very possible that some features / solutions have been installed and removed which might cause some problems for the SP1 install.

In my case on my development lab this was most certainly the case with literally dozens of (often half developed) solutions in various states of deployment!

So in this case you may have the configuration Wizard fail after SP1 setup with a message like this:

Upgrade Timer job is exiting due to exception: Microsoft.SharePoint.Upgrade.SPUpgradeException: Upgrade completed with errors.  Review the upgrade log file located in C:Program FilesCommon FilesMicrosoft SharedWeb Server Extensions14LOGSUpgrade-20110701-160359-545.log.  The number of errors and warnings is listed at the end of the upgrade log file.

The problem as you can see is a missing feature, however using the standard PowerShell get-SPFeature commands don’t reveal anything. This is due to the solution already being uninstalled (or perhaps never installed in the case of a migrated database). Fortunately there is a solution:

Thanks Phil, using the provided scripts I was quickly able to identify and remove the offending feature. Once done a rerun of the PSCONFIG wizard (in my case using the command line “PSCONFIG –cmd upgrade –inplace b2b”) completes without errors.

Hope that helps someone else out there. 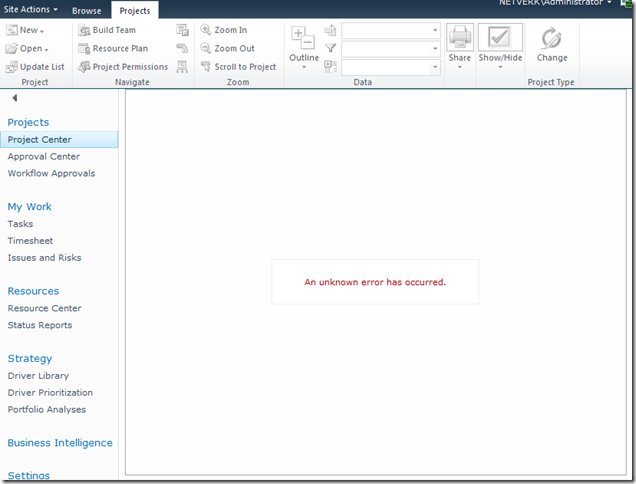 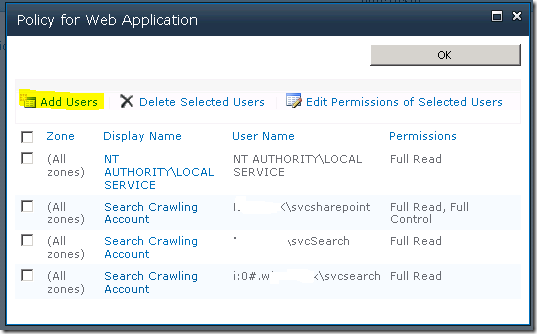 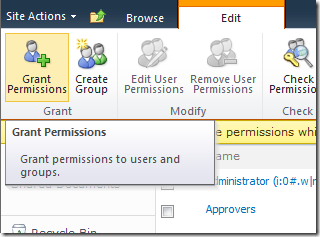 While diving deeper into the SharePoint 2010 PowerShell command-lets I realised that my last blog using a borrowed script based on 2007 was in need of a major update for 2010, so see here a version doing the same thing but with no use of STSADM (and thus no need to run as admin in 2008).

#This passes in the default credentials needed. If you need specific
#stuff you can use something else to elevate basically the permissions.
#Or run this task as a user that has a Policy above all the Web
#Applications with the correct permissions

The script still retrieves a list of all sites in all web applications in the farm (including Central Admin) and additionally retrives a list of sites in a text file by default located in “C:ToolsWarmupwarmup-extrasites.txt”