This is a new error that has been bugging me for a few weeks now:

The error message "Project Server encountered a problem with this error code:9000" occurs when attempting to save a project in Project Professional 2007 client:

Additionally you may receive a blank "Job failed" window when trying to check-in a project: 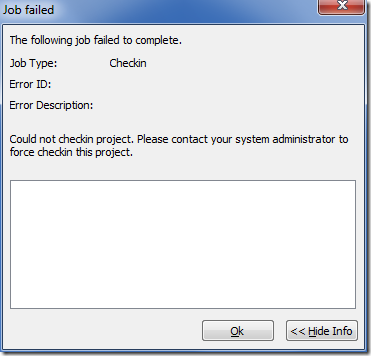 This problem is caused by an Internet Explorer login session to Project Web Access expiring and as a result the project client is forced to re-login, however this re-login only seems to be supported in Project Professional 2010 and not 2007 client running in backwards compatibility mode.

The best workaround to this is to not use the connect / disconnect and work offline options in Project Professional as this does not re-log you in.

Additionally perhaps avoid opening PWA in a separate Internet Explorer window so as to not logout inadvertently.

Since posting the above I have run into this error on some other occasions not related to Claims based authentication. Specifically I found this error would occur whenever attempting to save one particular MPP file into a server. In that particular case reviewing the schedule and specifically the resource sheet turned up the cause:

Clearly this resource is corrupted (this is an English install) in some way, what this indicates is that the error 9000 is a generic ‘error of last resort’ it would seem.

If you have configured any client to restrict permission to save a protected baseline then you might be unlucky enough to see this one, basically restricting this permission causes the next save to completely delete any previously saved baseline!
Not exactly what you meant when you tried to ‘protect’ that baseline is it?
Anyway I just noticed while researching another issue, that this has now been fixed!
Quote from KB958138:
“On the Edit User page in Project Web Access (PWA), you select the Deny check box for Save Unprotected Baseline. When you try to save a existing project file to a new file, baseline 0 through 10 are removed.”

I came across this problem while working with a customer and trying to use the very useful Budget Cost Resource feature, basically when using Budget Cost Resources and also restricting the ‘Save Protected Baseline’ permission (as many companies do) the Budget Cost values appear to be restricted with the baseline values! I.e. The values cannot be edited in the Task Usage view.

It definitely looks like a bug (ahem “code – defect”) to me, however it’s not one I have had a chance (or need) to log with MS.

Here are some reproduction notes I made while working on this one with a customer, needless to say we opted for the workaround as opposed to attempting to get a resolution.

Our organisation process requires that in Project Server Baselines can only be saved by the PMO department and not by project managers as such we have removed the default permission to ‘Save Protected Baseline’ from the ‘Project Managers’ project server group. Additionally for our project status reporting we need to track Budget expenditure compared to baseline, unfortunately we have found that when the ‘save protected baseline’ permission is removed from the PM’s they are no longer able to enter any budget costs into a project unless they were the original creator of the project (ie not someone who the ‘Owner’ was changed to). As our PMO is responsible for creating all projects with set templates and then assigning the PM this issue results in PM’s never being able to update Budget Cost’s.

Unable to add further budget costs to any item, HOWEVER the PM is able to delete exiting costs!

PM is able to edit all items in the ‘Budget Cost’ line.

If the procedure is changed so that the PM creates the Project in step 2 above then the PM is always able to edit the Budget Costs, however this requires that internal business process be changed and does not account for future changes in the assigned PM needing to make updates.

(Hope this helps someone out there…)

PS. Ten points to anyone who recognizes where my issue subjective template comes from!