I saw this issue when working with an old colleague Hammad Arif earlier this year and he came up with a solution written up here that worked nicely at the time, however I’ve come across this again and this time it proved more of a challenge.

When exporting to PDF Reporting Services reports containing multi-line text from a SQL datasource the first line of text loses all spaces between words, see screenshot taken from a PDF file:

Nope that’s not one particularly long German conjugation, that is the problem I’m talking about! It only seems to affect the first line of each multi-line based custom field value in the SSRS dataset and additionally when looking at the data in SQL or in the HTML source there is nothing different visible! However oddly on the affected projects a single odd character (&#8203;) does exist before the html <span>.

After much head scratching it took a call to Microsoft to identify that hidden away in the database tables are some characters, specifically HEX ‘0B 20’ which turns out to be the Zero Width Space or in HTML (&#8203;), the same character you can see in the HTML. Now this makes sense as despite these being invisible in the SQL tables using a SELECT statement, they still exist and cause these symptoms in the PDF but not when viewed on the Web or exported to Word or other formats.

Fortunately the resolution for the report is nice and simple;

To answer the question of where they came from, that is one I leave to the Microsoft escalation engineers. :)

Fortunately I do not often have to enact my customer’s disaster recovery plans, but when I do I am glad for things like SQL mirroring and SharePoint database fail-over.

No plan is perfect though, in this particular case Project Server OLAP cubes would refuse to build while failed over to the mirror server, giving only the following errors;

A network-related or instance-specific error has occurred while establishing a connection to SQL Server. Server is not found or not accessible. Check if instance name is correct and if SQL Server is configured to allow remote connections. For more information see SQL Server Books Online.

This problem is clearly caused by the SQL connection string, which in the configured cube looks like this:

As you can see the ‘Failover Partner’ parameter is missing, at first I thought that this was a classic case of not RTFM, if you neglect the steps detailed in the TechNet article (http://technet.microsoft.com/en-us/library/ff872145.aspx) on configuring SQL server mirroring for Project Server but instead only do the SharePoint configurations (which does get things online) then some Project Server specific connection strings are not updated.

The fix would seem to be pretty simple:

HOWEVER, this does not appear to fix the cubes, which will continue to fail with the above error on build! The above steps do update the Sample report data sources in the BI site, but even if you create a new cube it still builds without a ‘Failover Partner’ configured: 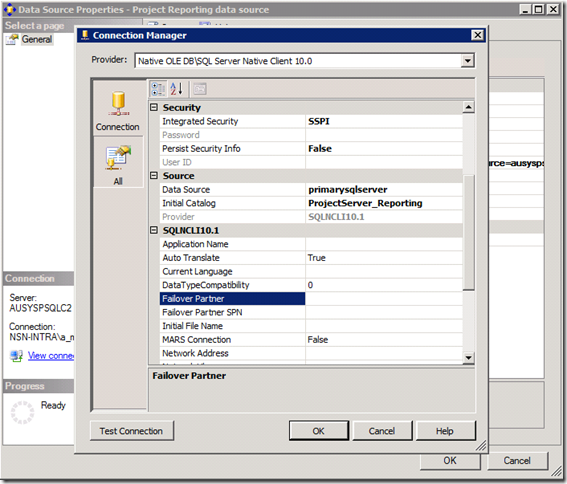 To get to the above open SQL Management Studio and connect to your Analysis Server, then from the Cube –> Data Sources properties you can edit the data source used.

The good thing is that there is a temporary workaround while in a failed-over scenario, just manually update that connection string with the correct failover partner. The problem with this is that each time PWA builds the cube this change will be overwritten, but you could automate that if need be (or disable PWA build and schedule the build in SSAS directly).

Hurrah! Now I can get back to my day job.

A long time ago (it seems) I blogged about reporting directly from the SharePoint workspace sites using SQL Reporting Services to get around the limitations with the reporting database refresh. Using XML provided a neat method for pulling data directly from all the out-of-the-box lists such as Risks and Issues, as well as other custom lists.

Unfortunately setup and maintenance was difficult requiring a little knowledge of web services as well as some XML syntax, but fortunately now with SQL Server 2008 R2 things have improved drastically! 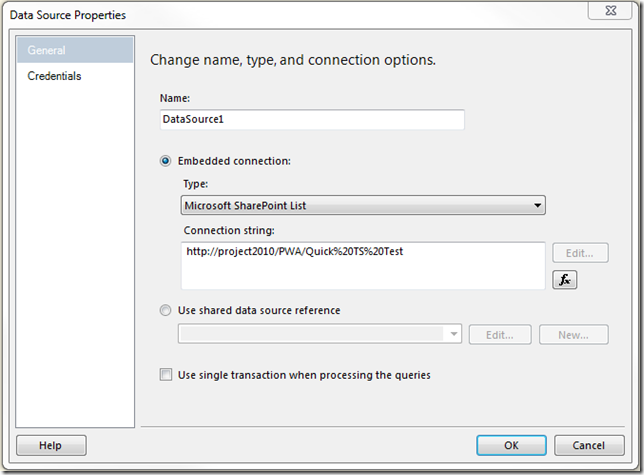 Better yet when you create a Data Set using the above data source the Query Designer is completely new: 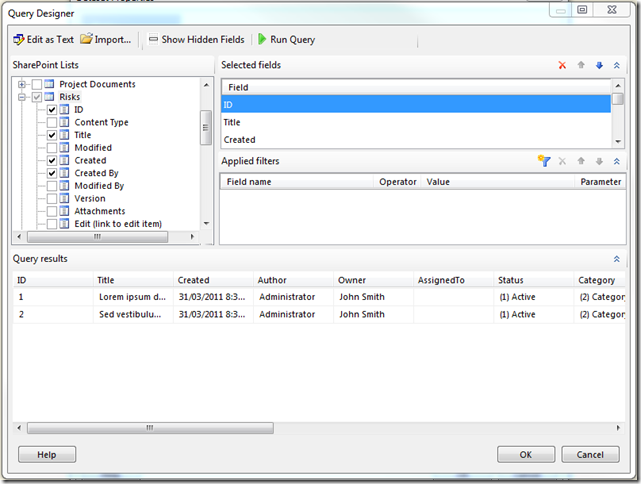 Finally no more messing around with column names using XML and having to have specific views configured in your SharePoint sites.

That should make things much easier!

BTW. Lastly it’s definitely worth mentioning that the above also works with Report Builder 3.0!

Came across this issue when building my cube using SQL AS 2005 with 2010 for the first time;

Errors in the OLAP storage engine: An error occurred while the dimension, with the ID of ‘PS2010TestCube1’, Name of ‘Assignment Owner’ was being processed.

Server: The operation has been cancelled.

Fortunately the solution was not too hard to come by; it seems that you need to install the SQL 2008 Native client on the SQL 2005 server in order to fix this one.

Hope that helps someone!

With SharePoint 2010 adding a good number of new databases to the default configuration one thing that is sorely missing is the ability to easily name those databases.

Is it just me who has to conform to strict database naming conventions in most installations of Project Server?

I’ve just been working on what I think is a pretty typical Project Server 2010 installation and found that in-order to simply prefix my databases names with something rather than let them be automatically named with a GUID I faced the following:

So it’s about time to get that installation PowerShell script done, as unless your happy with the default wizard configuration then this setup is getting quite long “just” to get Project Server 2010 installed.

Found this one out the hard way this week; it seems that currently the only supported version of SSRS for the SharePoint 2010 SRS Add-in is SQL 2008 R2. At least one forum poster from MSFT has confirmed this.

Annoying as it can be surprisingly hard enough to convince customers to install Windows 2008 let alone upgrade their SQL servers! Ah, well at least SRS can be separated from the SQL DB servers making it a bit easier.

Update 12/07: This has now been addressed by Microsoft in the SQL 2008 SP1 CU8 release which adds support to reporting services 2008 to work with the R2 add-in.