Back in the days of 2010 there was a Project Site List Viewer WebPart that gave you the ability to show specific lists (Risks, Issues or anything) from a given project’s site in a PDP. While in 2013 on-prem you can still install that solution starter from Fluent-Pro (here), that doesn’t help you with Project Online and not to mention with the dozens of on-prem scenarios where the solution doesn’t work without code modifications. So recently I was asked to solve this problem again and I thought that I’d try to find another way.

Let’s start with a screenshot of the end result:

Perfect it looks exactly like a typical SharePoint list only in the Project Detail Page for our project – and of course importantly it shows the Risk list from the currently open project.

Reason 9,999 why I love JavaScript

Basically using a small script we can show the actual SharePoint page for the risk list e.g. “/PWA/Project Name/Lists/Risks/AllItems.aspx?isdlg=1” in an iFrame on our PDP. To do that firstly you can see that I’ve added “&isdlg=1” to the URL which tells SharePoint to show the page without the rest of the SharePoint master page and quick launch menu in the frame (which just looks weird), then we need to update the address with the actual project’s name and finally by default the ribbon menu would be shown again in our frame so we need to hide that.

Okay so I won’t go through it line by line, but in summary what the script needs to do is the following:

If you’ve not used the CEWP much before here are a few reminders on how to create a PDP with this kind of script:

Firstly save the script above to a file named “showListonPDP.html” (note it is .html not .js), then upload that to your PWA site contents where everyone can access it /PWA/SiteAssets/ or /PWA/Site Collection Documents/ etc.

Then create a new PDP as normal and add the Media and Content -> Content Editor web part: 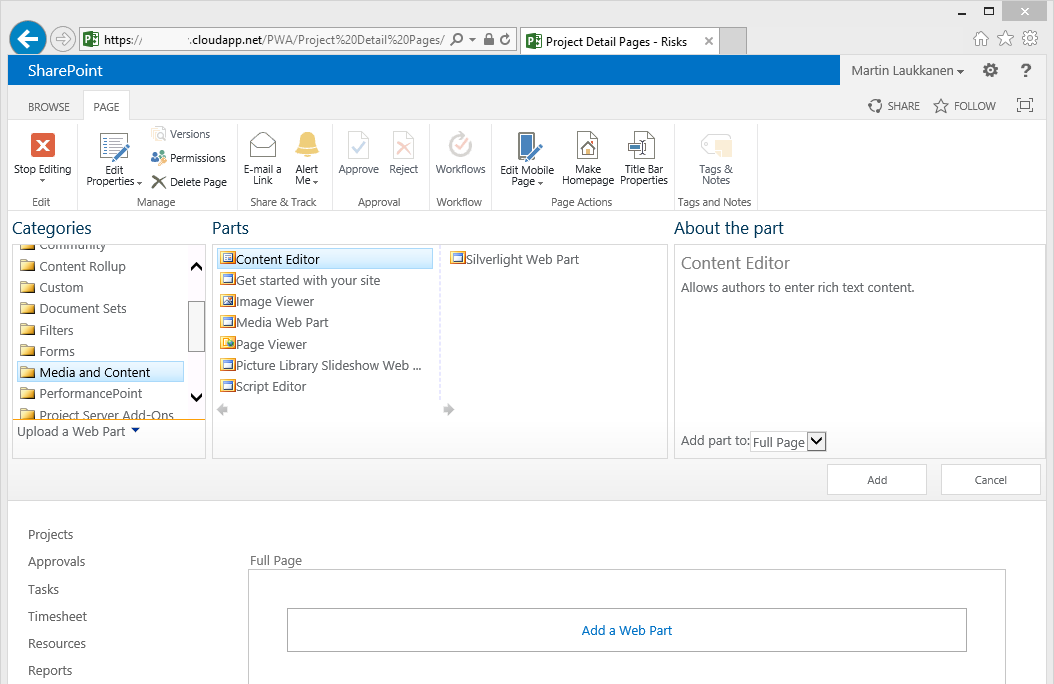 Now edit the web part properties and paste in the URL of the script: 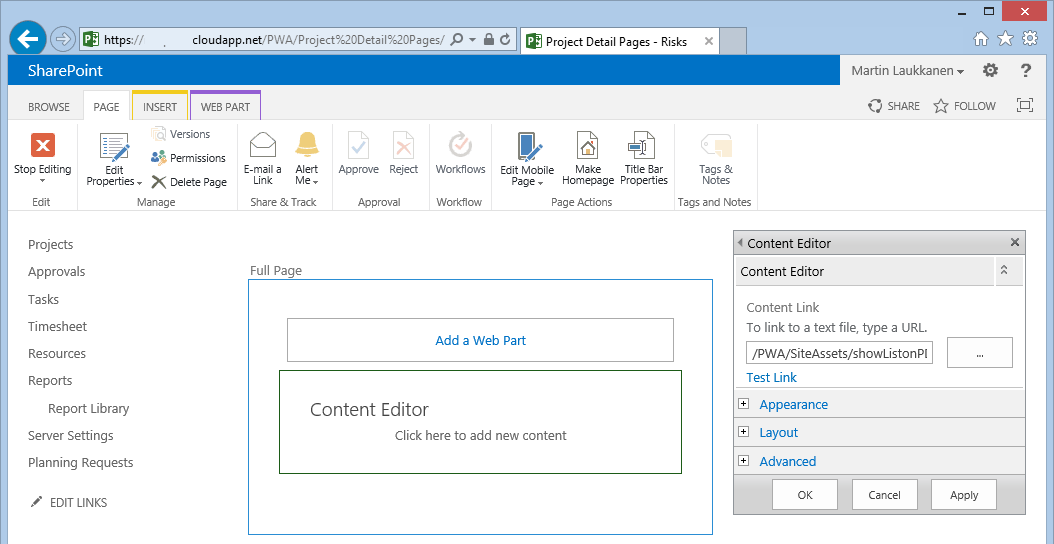 Note that the URL must be just the file name, not the full URL, e.g.: “/PWA/SiteAssets/showListonPDP.html”

Now add the PDP to your EPT and go ahead and open a project.

Now if you click the new or edit item menus it opens the form in the frame which could be better, fortunately SharePoint lists can be configured to open forms in a dialog, the option can be found from the list settings on the project site itself (obviously you want to do this on your project site template as well), so open your site project, go to the Risks list, and select site settings -> Advanced settings, at the bottom you will find:

Select yes and Ok, now when you go back to the PDP and click New Item this is what you should see: 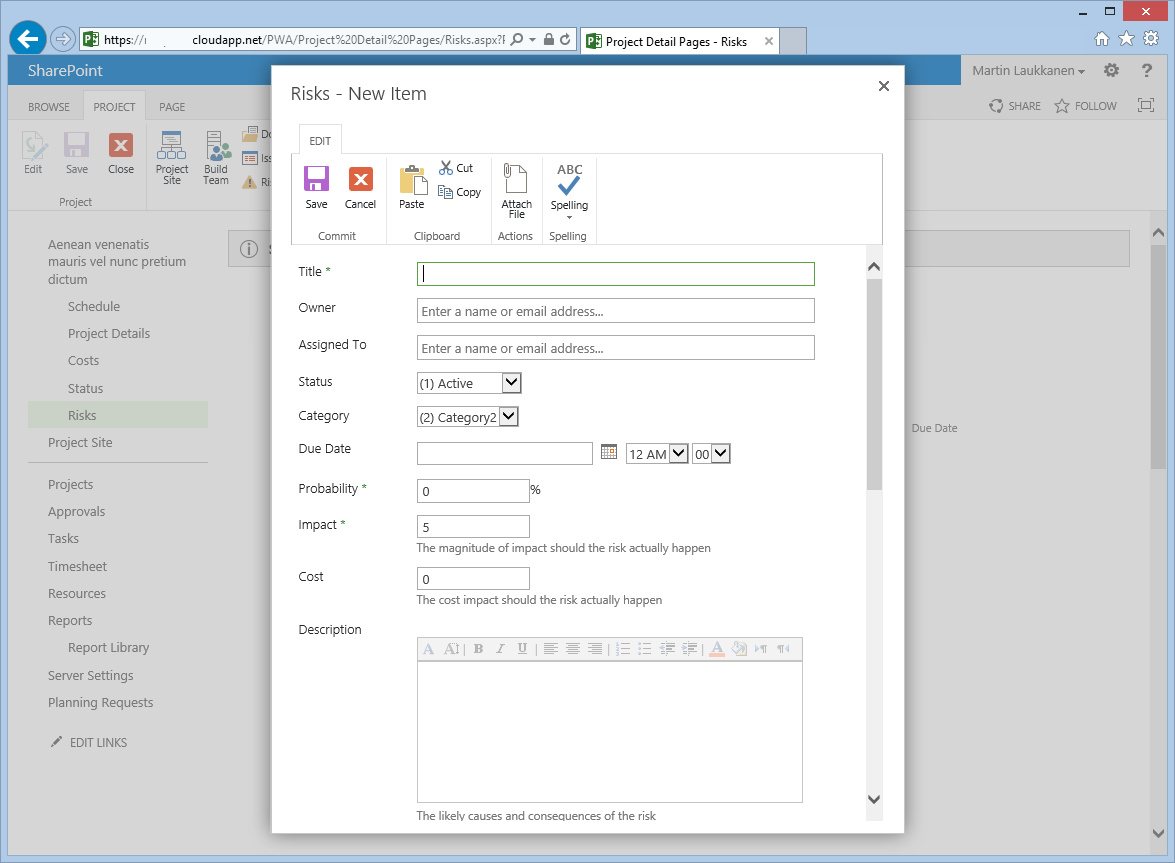 I came across this one working with a customer recently, basically the following error comes up whenever you attempt to edit a project schedule in PWA and selecting a view that contains custom gantt chart formatting:

Error Message: View Failure: The view failed to load. Press OK to reload this view with the default settings….

In some cases users see the additional message of:

An error occurred while opening your project. Give us a few minutes and try again. …

While this error is quite generic as it can be caused by a number of things, this specifically only occurs when attempting to edit a project using the view in question, all other views work (view and edit) and these custom views definitely work when only viewing the project data.

For example modifying a view to use the following Gantt Chart with “Custom Duration 1” selected will result in this error:

Finally I have tested this issue on a number of Project Server versions and as far as I can see it exists on all Project Server 2013 SP1 and above – up to the latest Cumulative, as well as Project Online (at the time of writing).

However it does not affect Project Server 2010.

Sorry can’t help you here, other than to disable the customisations to the gantt chart! I’ll be logging this one with Microsoft and will update this post if anything comes of that.

I came across this while working with a customer and quickly found that the error triggers a known issue in my Bulk Edit app as well which was causing some unexpected errors using the app for some people, however this is a broader issue as it causes basic OData feeds to fail completely with the following message: Error message accessing /_api/ProjectData/Projects

The problem can happen both on-prem or online but if you have access to the ULS logs you will see the following log entries (showing only the interesting bits):

As error logs go that is a pretty helpful one!

The issue is caused by the Enterprise Custom Field configuration of the Project Server, specifically to looks like there are some duplicate named fields (Campaignstatus in my error above), now of course that is of course not possible! However when you look at the OData feed you can see that a few things happen:

However there is a bug, OData is case-sensitive while SQL is not. So in my example above it seems that there are two fields the same name but with different cases, specifically I have the following two fields configured: Campaign Status and Campaignstatus. In my case if the second field was named CampaignStatus then this issue would not occur as it would have a number appended in the feed! (While this might sound a little esoteric actually I’ve already seen this a couple of times in German PWA instances where words are typically conjugated, etc)

Note; renaming a field to a different case does not work(!), you need to recreate the field in order to regenerate the correct ‘cased’ Odata name.

Hopefully this bug will be fixed in a future service pack, but for now in Bulk Edit at least I have implemented a workaround anyway.

I’ll be speaking in June at Microsoft in Zurich

Microsoft Switzerland has a day devoted to Project Server 2013 in Zurich on the 11th of June 2014, and with my new TPG hat on I’ll be speaking about a Extending Project Server in the afternoon!

Its a German event, but don’t worry I won’t be putting the room though an hour of my German (!) so that session will be delivered in English, so I hope you come along!

Of course including my session on Extending Project Online and on-premises with JavaScript Apps, see it here now if you missed it:

UPDATE 19/03: Just got the confirmation from Microsoft that my session PC403 was the highest rated of the conference! Awesome, thanks everyone for your evals and I’m very glad you enjoyed it!

The nice thing about Microsoft’s new continuous improvement / upgrade work on Project Online is the occasional new feature that pops up unannounced, like this: 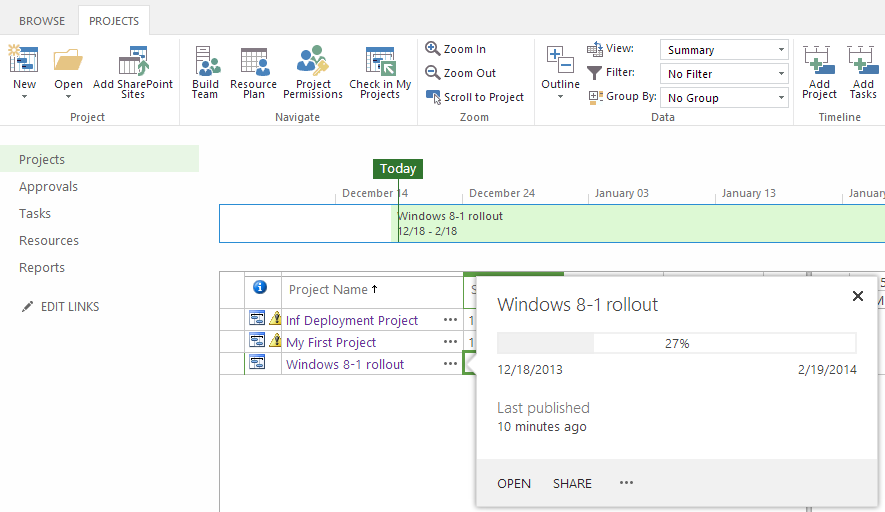 The ellipsis next to each project name in Project Center opens a dialog as you can see showing some handy project summary information including a progress bar. Neat.

Not sure when this appeared, no doubt sometime in the last few months, but my guess is that those of us not using Project Online will have to wait until Service Pack 1 to see it!