Project Server 2013 changed a lot when it comes to both security and reporting and I’ve had a few customers asking about configuring user access to OData both for reporting and apps (such as Bulk Edit), fortunately Microsoft has some good guidance available on MSDN covering this topic;

In the default SharePoint permission mode, not all Project Web App users have access to the OData feed. Only users in the following groups have access: Portfolio Viewers, Portfolio Managers, and Administrators

So basically if using Project Permission mode then this is what you’re after (preferably from Edit Group, not edit user as MSDN suggests):

Unfortunately as above article goes on to mention there is no granularity to the access, it is all or nothing so if you’re looking for the kind of flexibility that the cubes previously gave then unfortunately you’re out of luck!

What has this got to do with Apps?

OData and the REST Api’s used in CSOM / JSOM are closely related, and in the case of Project Apps that need to work with project data such as Bulk Edit, then we need to also grant access to “Use Remote Interfaces” in SharePoint, to do that you will need to check the Permission Levels configuration: Site Settings -> Site Permissions -> Permission Levels -> Edit

What if I want Granularity?

I’m not good a saying “no it can’t be done” :) so if you require reporting granularity then the solution would be to use the SSIS reporting to create your own local SQL replica where your DBAs can apply whatever permissions are required. Reason 999 why that SSIS solution is key to any deployment in the future!

How about Apps? The picture is a little better but at the same time less simple, REST is security trimmed, so a PM will by default only be able to update / modify the project to which he / she has permissions, great. However as Apps can leverage both OData and REST endpoints which work differently it may result in inconsistencies depending on how the App was designed, for example:

Bulk Edit (at the time of writing) will allow Read Access to all Projects as a minimum, BUT will only allow updates to projects that to which the user has the rights.

If you’re wondering about any other app, then these simple rules apply:

I expect in the future this to change, from experience project server security has been a moving target since the very beginning, so perhaps we’ll see more granularity in the future.

Hope that helps someone out there..

Recently while working with a colleague we came across a few easy to miss issues when configuring the App Management Service in a SharePoint farm and while troubleshooting those issues found a lack of online resources on what turned out to be super-simple issues to resolve. (Hindsight is great)

After installing and configuring the services, app domain and catalog as required, we could now open the SharePoint App Store, and choose an app to install, however the following message was displayed and the installation of any App would never begin.

Error text: Everything is fine, but we had a small problem getting your license. Please go back to the SharePoint Store to get this app again and you won’t be charged for it.

Everything’s fine hey? Looking at the ULS revealed that this was caused by security:

But how can this be, we’re testing using the Farm Admin account and so we have all permissions! It turns out, that is actually the problem! While I can’t say specifically where / what setting causes this, in a typical SharePoint 2013 install the Farm Admin (/ Installer account) is intentionally restricted in certain ways, my guess is something to do with local computer policies or such.

Login using a user account (who can be Site Collection Admin and all that)!

Issue 2: App installs without issue but does not work

Now we have our first app installed, however running it doesn’t quite work out. Unfortunately this time we get very little indication of the problem, in fact with Bulk Edit the app will start and look good, except nothing works! The buttons do nothing, and no data is displayed! :( 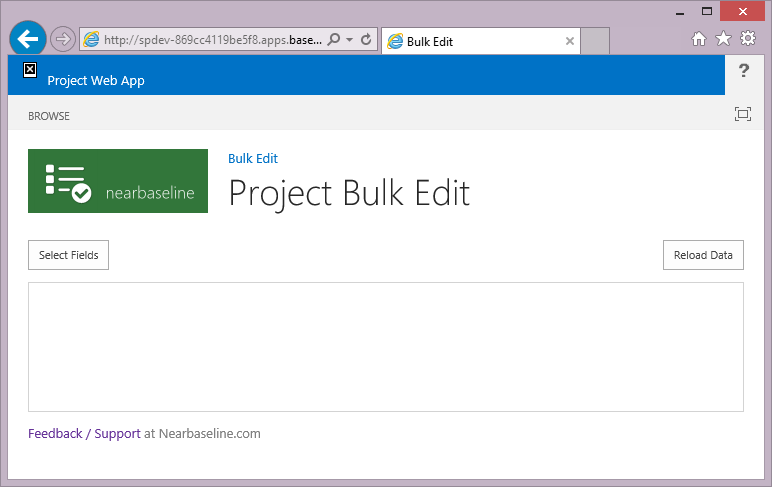 Similar issues happen with other apps installed and without looking at the F12 browser debug console the only indication that there is a problem is the top right hand corner site icon image which is just a little ‘x’.

If you do debug you will see an error like this:

Basically that tells me as a developer that something is seriously wrong in the farm (SP.js is missing which the whole JSOM api requires)!

Fortunately the solution was simple: SP.js was actually missing! Well not exactly, as it turns out while we had provisioned a single PWA site collection at /PWA in our Web App, we had not actually created a Default Root site collection at ‘/’. This configuration actually can break lots of things including SSRS and so this comes as no surprise really.

Simply creating a root site collection (using Blank or any template) fixed the issue and now all apps work as normal.

While possible the topic of another rather long post, here’s a list of other things to check if you get permissions issues trying to install apps (sorry this is from memory so pls comment below if you think any of this has changed):

Hope that helps someone else out there!

It’s not often these days I come across what seems to be a new Project Server 2010 error! Having said that, I would expect the same error to occur on either 2007 or 2013 as it relates to AD sync.

Anyway while working with a customer recently I came across the following issue that had started occurring for all new projects being created as well as on any attempt to synchronize the site permissions from Server Settings – Project Sites.

The effect of the error was that users cannot access any of the affected sites.

Notably though the AD sync was not experiencing any errors.

And in the ULS log we see some more details:

I’ve highlighted the interesting bits of the logs above, and on searching for this specific issue the only references relate to Search Service indicating one of the following causes:

So after speaking with the AD team it turns out the customer was in the middle of an Active Directory restructure (alarm bells start ringing!) and specifically about the same time when this issue was first reported the AD team had moved a group of PWA users into a new sub-domain in the same AD forest.

Not completely done yet though, as that change will need to be re-done in the near future further investigation was required. It turns out that the migration of accounts was being done in a staged manner, and specifically service accounts and admin accounts (including our Farm Admin) were NOT moved with the users, which is what caused our issue here.

If anyone else comes across this issue in the future let me know, as I have a strange feeling that this might be the first and last time this particular issue breaks a Project Server. :)

I’ve had the fun task of shoe-horning some 2010 PSI projects into Project Server 2013 recently, and the good news is that as promised the PSI is still there just as we remember it!

One particular exception I kept seeing in my code immediately when using SharePoint Permissions Mode (ie a Default install) was the following:

Which came with the unusually helpful accompanying ULS log errors;

The second log is the giveaway, I won’t be forgetting that limitation again!

A very frequent request I get is how to change the default permissions assigned by Project Server to Project Workspace Sites for all projects, unfortunately this is not something that is configurable in Project Server so the only option out of the box is to disable the permissions sync and manage those permissions manually. Of course if you don’t want Administrators to manage every user manually this is not an option.

This is made more annoying if you want PM’s to be able to manage the site, as by default they only have Contribute like access.

There are a few options that exist out there, notably this one; Adjust the Default Project Web Access Permission Levels, which uses a SharePoint timer job to manage the default Permission Levels. However I have had need for something simpler, and so recently for a customer I implemented the following:

My solution is by intent extremely simple, so simple that I will include the main piece of code below (as well as having the full solution attached), in short what this code does is the following:

On Publish of any project does the following;

So as you can see it only updates one user’s permissions, however it would be trivial to update the code to do more based on the Project Team and other requirements.

Here is the bulk of the code:

The code is bound to both OnPublished and OnSummaryPublished (to get the Save from PWA also), and ensures that the Owner will always have Admin rights, and if not all the PM has to do is republish.

Download only the WSP package here with – basic – instructions.

Post comments with any questions or additions even, but please note that I can’t provide support for the standalone WSP package.