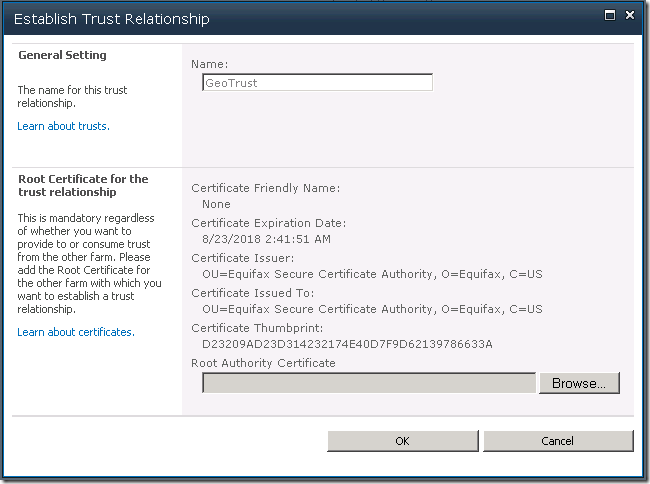 Unable to delete Published version of Project in 2010

This is an issue I have seen now with two different Project Server 2010 clients;

Delete Queue job fails and review of the ULS log shows the following:

Additionally enabling Verbose ULS logging for all Project Server events turns up this one:

It took the enabling of Verbose logging to figure out the cause, the give away was the timesheet line delete job, it seems that for some reason the TS Line GUID’s above were causing the failure.

So the solution was relatively simple, identify the Timesheets (and respective lines) and delete them manually.

To that end I ended up creating a couple of SQL scripts;

Identify all projects which exist in the Published Database but not in Draft.

— Query to identify projects in Publish but not in Draft

Identify all Timesheets with lines against projects not in the Draft database.

— Query to identify timesheets with lines against projects not in draft

Note: For both script’s replace your ProjectServer_* name, and then run this script against your PUBLISHED database.

Running the 1st script is not mandatory, although it can be useful as in my case it identified a few more projects with this issue. However: Ignore the ‘eGlobal …” project(s) and do not attempt by any means to remove them, you have been warned!

The second script will identify line by line timesheets that need to be edited / deleted before you can delete from Published the problematic project. This needs to be done in the usual ways, probably by the Resource themselves unless using delegation or something similar.

Good question! I was not able to identify the root cause of this one, although I did notice it occurring to me during a training session that I was hosting, in fact the issue occurred on the test project I was working on while testing the creation and use of Timesheet approval rules and of course submitting / approving / rejecting test timesheets. However despite that clue I was never able to reliably reproduce the issue, please leave a comment if you have any other ideas!

Issues in PerformancePoint when using OLAP and SQL datasources

I came across this little annoying issue while creating some linked PPS dashboards where one scorecard item would filter another report by the selected row (in this case a ‘Program Name’ custom field). I was stumped to get the following message when selecting my program:

After much head scratching I found the problem deep in the logs which for Google’s benefit I will include some server log snippets here:

An exception occurred while running a report. The following details may help you to diagnose the problem:

Microsoft.AnalysisServices.AdomdClient.AdomdErrorResponseException: Query (10, 19) Parser: The syntax for ‘A’ is incorrect.

The problem turned out to be a space in my custom field value name!

Basically the hint was in the Parameter and the syntax, it seems that PerformancePoint fails to send my parameter correctly and as a result it sends ‘Programme A’ as two separate invalid parameters ‘Programme’ and ‘A’, hence the error on “The syntax for ‘A’ is incorrect”.

This was quickly proved by updated the custom field lookup table values to remove any spaces, which after a cube rebuild resolved the error!

Definitely chalk that one down to a little defect hidden in the code somewhere!

When restoring SharePoint 2010 databases or sites I have recently come across the following problem:

Access Denied to all Sites for all users, including Site Collection Admins.

This appears similar to old 2007 restore issues which were fixed using the STSADM MigrateUser command, however in this case it seems that the STSADM (or PowerShell move-spuser) commands doesn’t fix the issue. And I have definitely made certain to change the Site Collection admin on the restored site collections using Central Admin.

A little investigation revealed that the reason is the use of Claims (or Forms) Authentication in either the source or destination web application, so in my case where my Test environment used Claims (both NTLM and LDAP) but my Prod was only going to use NTLM authentication the restored sites were inaccessible (including PWA!).

Fortunately in my case I found a workaround; setup my new Web App to use Claims, however only enable NTLM authentication, effectively resulting in a pure NTLM setup. However that won’t always work, in fact I have another case where the source data (from an old 2007 portal) is using NTLM and I want to migrate it to 2010 using Claims, in that case another solution will be required.

I plan to investigate further using the "move-spuser" powershell command as that seems to be the solution, it just seems that something is preventing it from migrating the users as expected. I’ll update this blog with my results.