Unable to delete Published version of Project in 2010

This is an issue I have seen now with two different Project Server 2010 clients;

Delete Queue job fails and review of the ULS log shows the following:

Additionally enabling Verbose ULS logging for all Project Server events turns up this one:

It took the enabling of Verbose logging to figure out the cause, the give away was the timesheet line delete job, it seems that for some reason the TS Line GUID’s above were causing the failure.

So the solution was relatively simple, identify the Timesheets (and respective lines) and delete them manually.

To that end I ended up creating a couple of SQL scripts;

Identify all projects which exist in the Published Database but not in Draft.

— Query to identify projects in Publish but not in Draft

Identify all Timesheets with lines against projects not in the Draft database.

— Query to identify timesheets with lines against projects not in draft

Note: For both script’s replace your ProjectServer_* name, and then run this script against your PUBLISHED database.

Running the 1st script is not mandatory, although it can be useful as in my case it identified a few more projects with this issue. However: Ignore the ‘eGlobal …” project(s) and do not attempt by any means to remove them, you have been warned!

The second script will identify line by line timesheets that need to be edited / deleted before you can delete from Published the problematic project. This needs to be done in the usual ways, probably by the Resource themselves unless using delegation or something similar.

Good question! I was not able to identify the root cause of this one, although I did notice it occurring to me during a training session that I was hosting, in fact the issue occurred on the test project I was working on while testing the creation and use of Timesheet approval rules and of course submitting / approving / rejecting test timesheets. However despite that clue I was never able to reliably reproduce the issue, please leave a comment if you have any other ideas!

Brian posted this link to a new document posted on the Microsoft Project Hompage containing a slide deck detailing the limitations of the new 2010 Online Editing feature, I thought that it was definitely worth a mention here as this is one feature that I have had a lot of experience with in 2010.

Here’s a snapshot of the contents: 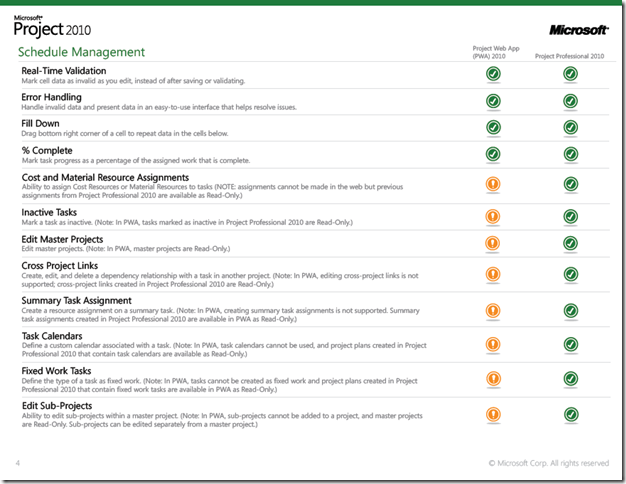 There are a couple of things in there that I had not yet noticed, although the Cost resource one I learnt the hard way trying to save Budget Cost resources in my EPT template!

However a couple of the limitations that have most affected me and my clients were actually not mentioned, they include:

This is a useful solution; with it you can update on a PDP an Excel spreadsheet saved in project’s workspace document library and then potentially update custom fields from the results.

However it is far from a complete solution to download and deploy.

Installed as per instructions (build / package / run script), then when adding the web part this familiar error occurred:

“An unexpected error has occurred.”

A quick look at the ULS shows more details:

The source was not found, but some or all event logs could not be searched. Inaccessible logs: Security.

Now that’s interesting as I had this exact same issue a few months back working with a 2007 PSI project, it turns out the answer is rather simple; the web service is attempting to write to the event log using “EventLog.WriteEntry” method calls, however in Windows 2008 and above this is restricted to Administrators only. So as the PWA users are not local admins the error was guaranteed.

A quick solution is to comment out each line in the code beginning with “EventLog.” of course that will disable the logging, so you would be better off doing that after you get everything else working. The file in the solution that you are after is CostAndBenefiXlsWebPart.cs in the WebPart.CostBenefit project and you’ll find about half a dozen envent log entries to comment out.

While your in that file commenting out lines, you’ll most likely notice this;

Although the solution will work without changing this, as that is only used when no workspace site exists (like when in server settings – project detail pages), updating that to point to your http://server/pwa/template workspace site template will fix any file not found issues when setting up your PDPs.

A little digging turned up the cause of this one to be the embedded ID in that URL “&id=1”, which means that it is trying to open the document with ID 1 in that particular list. This again is hard coded in the same .cs file as above (line 191), so you can either make certain that in your template above the first file saved to the Project Documents folder is your xls sheet, or modify the code again.

So now we should have a working webpart referencing our Excel sheet saved in the project workspace site, there are some obvious limitations, not least of all the inability to use any other spreadsheet in the webpart. But I guess that’s why they call it a “solution starter”.

Update 23/10/2010: Most of the points above have been fixed in the more recent updates to the solution starter package, make sure you update your code from Codeplex: http://code.msdn.microsoft.com/P2010SolutionStarter

I’ve just had my first opportunity to dive into the recently released by Microsoft Project 2010 Solution Starters (see Jan’s blog post), what first caught my eye was the Demand Management Dynamic Workflow solution which aims to allow you to: “Dynamically create a linear workflow based on stages”.

My first impression is WOW!

This is a very simple way to create basic workflows using a simple Infopath form in PWA, the amazing thing is it handles the approvals so well with options that should cover most requirements, here’s a screenshot: 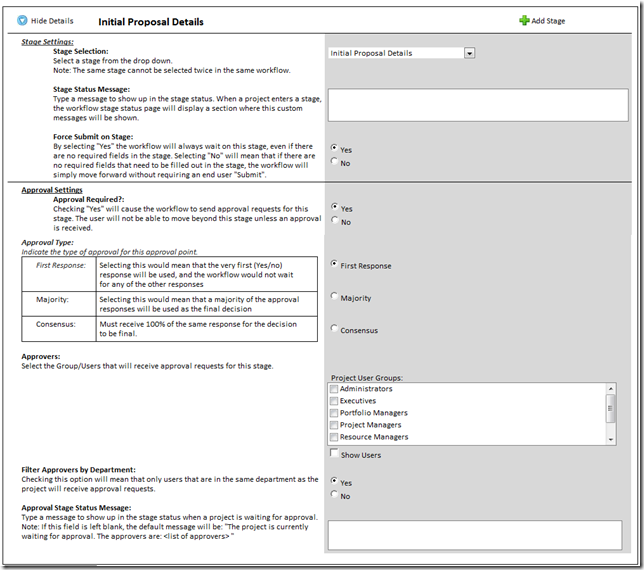 Using the tool is dead easy, just the following simple steps are required to create a new workflow in no time at all:

There are some limitations of course, this really only does cover linear approval / rejection scenarios, if you need anything more complex like a return to previous stage on rejection from my testing it looks like you’ll still be needing your Visual Studio skills. But still I can see the majority of workflow requirements being met by this little gem!

Check out the CodePlex home here for downloads and installation details: http://code.msdn.microsoft.com/P2010SolutionStarter/Release/ProjectReleases.aspx?ReleaseId=4631

Came across this issue when building my cube using SQL AS 2005 with 2010 for the first time;

Errors in the OLAP storage engine: An error occurred while the dimension, with the ID of ‘PS2010TestCube1’, Name of ‘Assignment Owner’ was being processed.

Server: The operation has been cancelled.

Fortunately the solution was not too hard to come by; it seems that you need to install the SQL 2008 Native client on the SQL 2005 server in order to fix this one.

Hope that helps someone!